The "Power of Coding is now accepting registrations for the "Introduction To Coding For Beginners" event which is booked into the Clever Office on First Street in Collingwood. The event runs 4 consecutive Mondays beginning at 6:00 pm to 8:30 pm starting Monday March 9th, 2020 (excluding the Monday on the week of the March Break). To register click here and more information see the Course Information page .

A quick look at another very playable video game created by one of my students James P. Since taking the "Power of Coding" and learning to code last year, James has created a large number of projects with a very wide variety styles. This is a very simple example of a snake game from James.

Past "Power of Coding" Successes

Greg being interviewed at 97.7 Max FM in Collingwood

September 2019 - "Power of Coding" in the Georgian Triangle is officially launched.

Coding in the news on Global TV

In October I completed two "Power of Coding" - "Introduction to Coding for Beginners" classes at St. Peter the Apostle Catholic Elementary School in Parry Sound. It was a great experience for me to drive up to Parry Sound for four Mondays in October. Not only did I get the chance to see the incredibly beautiful autumn colours and all the lakes but more importantly it was an opportunity to meet the terrific staff and students of St. Peter's.

Many thanks to Maria Lyon, Michael Cogswell and especially principal Susan Eccleshall for their warm hospitality and support. It was a pleasure and a privilege to be in your classrooms and I hope to make it back up to St. Peter's at some point in the future. 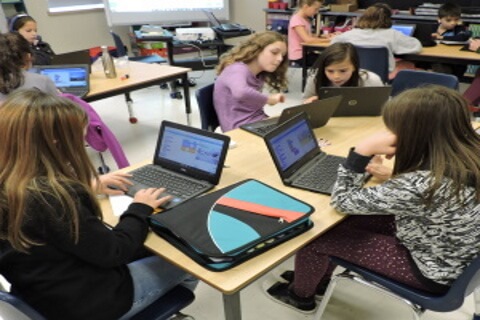 October also saw me completing another "Power of Coding" - "Introduction to Coding for Beginners" class at St. Mary's Catholic Elementary School in Collingwood. Every time I am at St. Mary's it feels like home to me. St. Mary's is where the "Power of Coding" started and I am always impressed at the level of interest and enthusiasm that St. Mary's students have for Coding. My wife Tina Moneypenny and Mrs. Jan Dance have done such an amazing job satisfying the interest in Coding at St. Mary's. I plan to pop in every once in a while just to reconnect with the kids and see what wonderful creations they have come up with.

The "Power of Coding" humble beginnings started in late 2014 culminating in early 2015 with the establishment of the official St. Mary's Collingwood Coding Club. At this point in time, the real power of teaching coding to kids was just beginning to be noticed by educators, parents and kids alike. Click the icon on the left to view a PDF of the first article in the press that captures those first successes and click here for the link to the article on the media provider's site (if it is still available / accessible)

The following year, the "Power of Coding" partnered with St. Mary's Catholic Elementary school in Collingwookd and the Simcoe Muskoka Catholic District School Board to offer a week-long "Coding Camp" at the Collingwood St. Mary's site. The camp was open to any child in Ontario between the ages of 9 and 13. The camp was run by myself, my wife Tina and dedicated educator Jan Dance and included a focus on Coding with Robotics programming and media creation elements. The week concluded with an "Acadamy Awards" Ocsar event to celebrate and review their media creations along with a Robot programming Olympics. The week was a whirlwind of creating, coding, learning and daily physical activity and games that all supported coding principles. The camp was covered by two local press agencies as well. Click the icons on the left to view PDFs of the "Coding Camp" article in the Collingwood "Connection" and the Collingwood "Enterprise Bulletin" respectively. Also click here for the link to the article on the Colllingwood Connection's site (if it is still available / accessible)

Why teaching kids to Code is so important

Why we need to teach our kids to Code

CBC - Why kids should learn to Code

Day 4 Decisions Review - "Intro to Coding" at the Clever Office

Day 2 Loops - "Intro to Coding" at the Clever Office